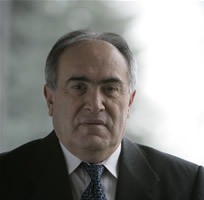 Eliaz P. Babaev (sometimes spelled Eilaz) is a co-founder, President and CEO of Arobella Medical, LLC. A recognized leader in his field, all Arobella technology and innovation is grounded in Eliaz’ fifty years working in non-imaging advanced ultrasound technology.

Eliaz has been a consistent and prodigious inventor, with over 13 Issued and over 15 filed U.S. Patents. He is also the author of 33 issued U.S.S.R. Patents in Biomedical/Biomechanics, including areas such as advanced ultrasound technology, biomedical materials and orthopedics.

Before co-founding Arobella, Eliaz has held numerous positions in business and academia. He was the co-founder, CEO and later Chief Technical Officer of Celleration, Inc. Prior to that, Eliaz worked as an ultrasound system design engineer and research scientist for DiaSorin, Inc., SpectRx, and AeroPag-USA, Inc. Before immigrating to the United States in 1994, Eliaz was a Professor and Director of the Biomedical Engineering Center at Azerbaijan Technical University. Before that he was a Ph.D student and Assistant Professor in the Biomedical Engineering Department of Bauman Moscow State Technical University. Eliaz has also been a Research Fellow in Biomechanics and Bioengineering at the Warsaw University of Technology and Bulgarian Academy of Sciences, and a Visiting Professor at several universities in the People’s Republic of China.